Blurb: Around the world, black handprints are appearing on doorways, scorched there by winged strangers who have crept through a slit in the sky.In a dark and dusty shop, a devil’s supply of human teeth grows dangerously low.And in the tangled lanes of Prague, a young art student is about to be caught up in a brutal otherwordly war.

Meet Karou. She fills her sketchbooks with monsters that may or may not be real, she’s prone to disappearing on mysterious “errands”, she speaks many languages – not all of them human – and her bright blue hair actually grows out of her head that color. Who is she? That is the question that haunts her, and she’s about to find out.

When beautiful, haunted Akiva fixes fiery eyes on her in an alley in Marrakesh, the result is blood and starlight, secrets unveiled, and a star-crossed love whose roots drink deep of a violent past. But will Karou live to regret learning the truth about herself?

My Thoughts: I started listening to this when the new semester started, and I had a really hard time just listening to it in the car. I would have finished it much sooner if it wasn’t for school stuff.

I love how the story unfolded. I love how my mind was changed about some characters. The world that Laini created was amazing. I just enjoyed it so much.

The mystery of it all was just at the right level. It was revealed a little here and a little there, but it kept you wondering.

All Bree knows is that living with her fellow newborns has few certainties and even fewer rules: watch your back, don’t draw attention to yourself, and above all, make it home by sunrise or die. What she doesn’t know: her time as an immortal is quickly running out.

Read Via: Hardback book (own it)

My Thoughts: I had bought this a long time ago, when I found it existed because I really enjoyed Twilight. I thought now was a good as time any to read it, hoping I did not forget too much of the series.

It took my a while to get back into the world of Twilight. And honestly, I do not remember Bree at all in the series. Anyway, the characters were likable, surprisingly. Even when she was showing what it was like to be like the “bad” vampires I liked Bree. It it hard to describe her without spoiling too much, but she seemed like a honest person.

So, the ending is already known because it is stated in the beginning or if you remember her from the series. However, I hoped for a different ending. I was heart broken for her.

Reviews by the Same Author:

Blurb: A copy of Fantastic Beasts and Where to Find Them resides on almost every wizarding household in the country. Now, for a limited period only, Muggles too have the chance to discover where the Quintaped lives, what the Puffskein eats, and why it is best not to leave milk out for a Knarl.

Read via: Hardback book (own it)

My Thoughts: This would have been interesting to read as I read the Harry Potter series years ago. There was so much information about all the creatures. It was really interesting. If you enjoyed Harry Potter, I suggest you read these stories. 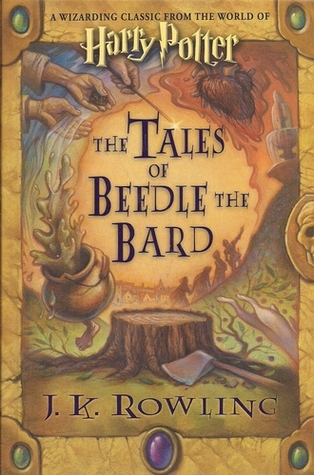 Blurb: The Tales of Beedle the Bard, a Wizarding classic, first came to Muggle readers’ attention in the book known as Harry Potter and the Deathly Hallows. Now, thanks to Hermione Granger’s new translation from the ancient runes, we present this stunning edition with an introduction, notes, and illustrations by J. K. Rowling, and extensive commentary by Albus Dumbledore. Never before have Muggles been privy to these richly imaginative tales: “The Wizard and the Hopping Pot,” “The Fountain of Fair Fortune,” “The Warlock’s Hairy Heart,” “Babbitty Rabbitty and Her Cackling Stump,” and of course, “The Tale of the Three Brothers.” But not only are they the equal of fairy tales we now know and love, reading them gives new insight into the world of Harry Potter.

My Thoughts: I haven’t heard too much about this book, but I was pleasantly surprised. I really liked the detailed stories that tied in the the world of Harry Potter, which I miss. Each story seemed like it would a true bedtime story.

Blurb: Set in England’s Downs, a once idyllic rural landscape, this stirring tale of adventure, courage and survival follows a band of very special creatures on their flight from the intrusion of man and the certain destruction of their home. Led by a stouthearted pair of friends, they journey forth from their native Sandleford Warren through the harrowing trials posed by predators and adversaries, to a mysterious promised land and a more perfect society.

My Thoughts: A friend of mine had me watch the movie adaption when I was in junior high. It changed my view of the world forever. Therefore, I wanted to read the book. This book is so detailed and covers so much. It is an amazing book, and I really enjoyed reading it. It opens your eyes of the lives of other animals. The development and adventure was just great. I liked the ending as well.

Blurb: The only fight she can’t win is the one for Perry’s heart. Following the stunning climax in Through the Ever Night, the Tides have been forced to seek shelter from the Aether storms in a dismal, secluded cave. But Brooke’s memories of the cave go back much further, to when she and Perry used to come here together. That was before Perry fell in love with Aria and before Vale’s dealings with the Dwellers altered the course of the Tides forever.

My Thoughts: I did not like this novella as much as the other one. It was interesting to find out more about Brooke though. I don’t dislike her. That doesn’t mean that I like her. I feel like I am understand her better though.

Blurb: After a childhood spent wandering the borderlands, Roar finally feels like he has a home with the Tides. His best friend Perry is like a brother to him, and Perry’s sister, Liv, is the love of his life. But Perry and Liv’s unpredictable older brother, Vale, is the Blood Lord of the Tides, and he has never looked kindly on Roar and Liv’s union. Normally, Roar couldn’t care less about Vale’s opinion. But with food running low and conditions worsening every day, Vale’s leadership is more vital—and more brutal—than ever. Desperate to protect his tribe, Vale makes a decision that will shatter the life Roar knew and change the fate of the Tides forever.

My Thoughts: Even thought this is technically before the trilogy, I would suggest reading this after the main books. There are several spoilers. I liked this novella. It was sweet and revealed more about Liv. I guess I misunderstood the whole time frame that the series took place. I thought it was a much longer span of time.

Blurb: The race to the Still Blue has reached a stalemate. Aria and Perry are determined to find this last safe haven from the Aether storms before Sable and Hess do – and they are just as determined to stay together.

Within the confines of a cave, they’re using as a makeshift refuge, they struggle to reconcile their people, Dwellers and Outsiders, who are united only in their hatred of their desperate situation. Meanwhile, time is running out to rescue Cinder, who was abducted by Hess …

Listened to Via: Audiobook (library)

My Thoughts: Amazing! This last novel was so action packed. I hope no one has seen me driving while listening to this book, because I have tried to tear my steering wheel off a couple times. There were so many emotions that I have felt while reading this book. I have come to love Aria, Perry, and Roar. I really enjoyed this trilogy and I am upset to see it end.

Also, I was so happy to have the same reader from the first novel in this one. I feel like her voice is Aria’s voice.

Blurb: Since she’d been on the outside, she’d survived an Aether storm, she’d had a knife held to her throat, and she’d seen men murdered. This was worse.

Exiled from her home, the enclosed city of Reverie, Aria knows her chances of surviving in the outer wasteland—known as The Death Shop—are slim. If the cannibals don’t get her, the violent, electrified energy storms will. She’s been taught that the very air she breathes can kill her. Then Aria meets an Outsider named Perry. He’s wild—a savage—and her only hope of staying alive.

My Thoughts: I really like this book! I love the plot, characters, pacing, and the action. It was really hard for me to just listen to this in my car, or leave my car because I wanted to know what was going to happen! I think Perry is going to be one of my favorite characters and fictional crush.

Each chapter switch perspective, which I think was done very well. I really got a good understanding of what each character was feeling and thinking. However, it was not always spoon feed. Also, I liked how not everything was made into a big deal.

At first, as always, I was not sure if I was going to like the narrator (Bernadetta Dunne Flagler). That quickly passed. I really like how she read the novel. Some parts were annoying, but overall I enjoyed her reading.

Blurb: Allie will embrace her cold vampire side to hunt down and end Sarren, the psychopathic vampire who murdered Zeke. But the trail is bloody and long, Allie and her companions – her creator Kanin, and her blood brother, Jackal. The trail is leading straight to the one place they must protect at any cost – the last vampire-free zone on Earth, Eden. And Sarren has on final, brutal shock in store for Allie.

My Thoughts: I am not sure what to say without spoiling. I really liked how everything turned out, even though I was shocked and sad. I saw some parts coming, but not all. There was just a little too much fighting for my taste and this book seemed a little dragged out. There parts that made up for it. I ended up liking characters I was sure I would loathe.Overall, I would say I really enjoyed this trilogy. I am sad to see it end.

Funny story. I was trying so hard to finish this book Wednesday (yesterday). I started at 55% and made it to 94% before I had to leave for work. I planned to finish it on my breaks, but it ended up only being like three pages left of the story! So, I technically finished it after midnight … today.