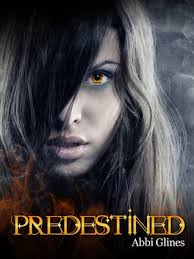 Blurb: You would think after helping save her boyfriend from an eternity in Hell that things would go back to normal. Well, as normal as life can be when you can see souls and your boyfriend is Death. But for Pagan Moore, things are just getting weirder.

The high school quarterback and reigning heartthrob, Leif Montgomery, is missing. While the town is in a frenzy of worry, Pagan is a nervous wreck for other reasons. Apparently good ‘ol Leif isn’t your average teenage boy. He isn’t even human. According to Death, Leif doesn’t have a soul. The quarterback may have skipped town but he’s still showing up in Pagan’s dreams… uninvited.

Dank has known from the beginning Leif wasn’t human. But he hadn’t worried about a simple soulless creature. Now, he realizes he made a grave mistake. Pagan’s soul has been marked since birth as a restitution, to a spirit so dark not even Death walks near it.  Dank knows saving Pagan’s soul won’t be easy but Pagan is his. And he’s already proven he’ll defy Heaven to keep her. If Hell wants a piece of him too,  then bring it on.4

CK’s Thoughts: I am so glad that the author wrote this book in book point of views, Death’s (Dank) and Pagan’s. This book was great. There was kind of a love triangle going on between Leif, Pagan and Dank. I don’t really get into the whole love triangle thing but in this book I liked it. I thought it was great but kind of crazy how there was two people fighting over Pagan’s soul. Even though Dank being Death could out rank Leif he still had a hard time fighting to get Pagan when Leif disappeared with her. I really can’t wait to read the novella Leif, and the book Ceaseless.

Magnus’ Thoughts: I was actually very surprised how well this turned out. For some reason, I was thinking the story might end up lame. Gladly, it didn’t. As CK mentioned, the book does switch point of views, which I really liked. I also liked how, even though Dank is Death it is not very religious. I believe I mentioned in my review of the first book, that I really could not like Pagan, but that has changed now.There was just so much development and stuff going on. I cried several times. I was very pleased with the ending of this book, and I would like to see what happens in the final book.